Proposition 187: The Granddaddy of Anti-Immigrant Measures 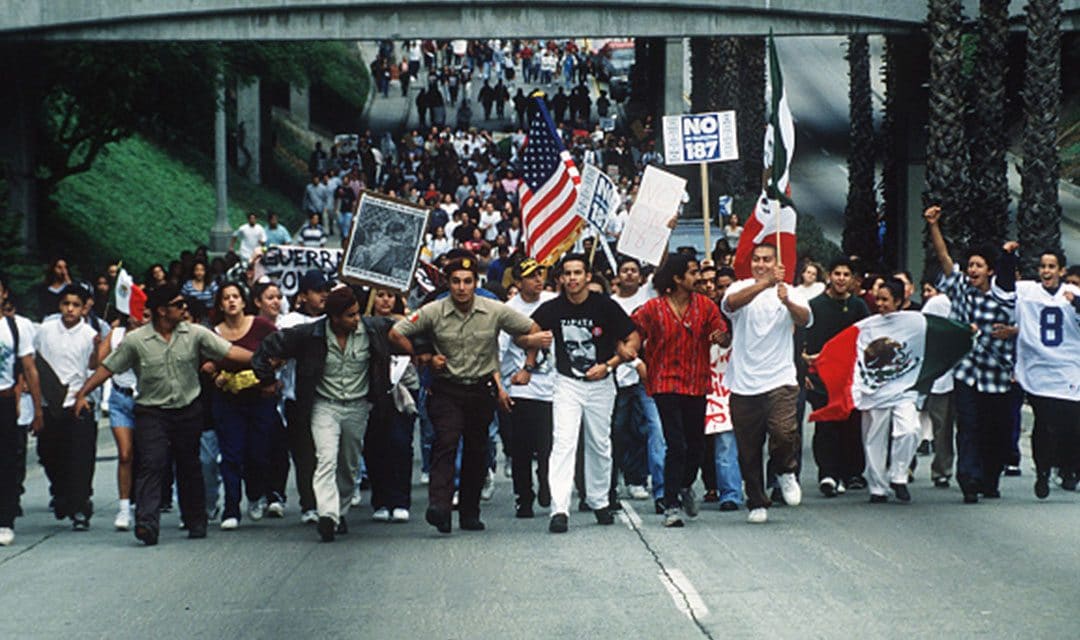 State laws attempting to regulate immigration became all the rage in several states across the last decade, but the grandfather of them all was California’s Proposition 187. Voters passed the measure in 1994 after a campaign that bitterly divided residents and was championed by then-Governor Pete Wilson and the state Republican Party.

Very few issues had as profound an impact as Prop. 187 had on California politics and the nation’s immigration policies. But thanks to swift and effective legal challenges, most of the anti-immigrant measure never went into effect.

Proponents framed Prop. 187, the so-called “Save our State” initiative, as a response to an increase in unauthorized immigration, arguing that taxpayers’ money was wasted on those immigrants while U.S. citizens felt the pinch of a recession that hit California in the late 1980s.

The initiative was broadly designed to deny almost every state social service—except emergency health care—to people who were not in this country legally. It barred them from receiving a public K-12 education, non-emergency public health care or any other public social service.  It would have turned every school, health care facility and their employees into de facto immigration agents obligated to report the status of these immigrants to federal authorities. And it would likely have led to discrimination and racial profiling of citizens and legal residents alike, thanks to a requirement that providers question and report anyone they reasonably suspected of being undocumented.

Essentially, Prop. 187 scapegoated undocumented immigrants, attempting to blame them for all of California’s ills. It presented a simple solution to economic problems to gain political traction, a formula used in most anti-immigrant proposals and by many politicians before and since the measure was enacted.

From day one as the proponents gathered signatures, MALDEF and a coalition of civil rights groups were monitoring the situation, preparing to campaign against the initiative and challenge it in court if necessary.

“Someone in the coalition knew a mole in the campaign, and it was clear they were coming to their deadline without enough signatures to qualify,” recalls MALDEF President and General Counsel Thomas A. Saenz, then a staff attorney at the organization. “What put them over the top was Governor Wilson having the Republicans mail out a petition to their members. We knew then he would use it as a centerpiece of his reelection campaign.”

Wilson championed the initiative a group of Orange County anti-immigrant activists and former immigration officials had put together because his reelection prospects in 1994 were low. He gave the dying initiative new life—and resources—and it passed with 58.9 percent of the vote. And Wilson was reelected to four more years as governor.

He didn’t know it then, but it would be the end of his political career, as well as the beginning of a long decline for the state Republican Party.

Exit polls showed that three quarters of Latino voters opposed Prop. 187, in part thanks to the campaign against the initiative launched by MALDEF, then headed by Antonia Hernandez, and joined by Latino elected officials.  That campaign was needed because initial polling found majority support by Latinos for the initiative in the midst of a difficult economy.

“The reality is that the measure was not just unconstitutional, but also bad policy,” said Saenz. “It wouldn’t deter immigration, and at the same time it would leave children without an education, and result in increases in crime and threats to public health, as well as discrimination against many residents, not necessarily only immigrants.”

Indeed, news reports and scholarly studies documented the fear and trauma that gripped the immigrant community after the measure passed.

In Nov. 1994, the Los Angeles Times reported on the death of Julio Cano, a 12-year-old boy whose parents “delayed seeking medical treatment for their son because they were afraid of being deported.”  Julio’s parents, who were undocumented, described the fear they felt and “how they considered taking their son to a hospital, but had been denied non-emergency care before and believed with the passage of Prop. 187 they might be reported to authorities,” the newspaper reported.

In San Francisco, Norma reported that her 12-year-old daughter was afraid of going to school and repeatedly asked her:  “Mommy, what am I going to do if immigration picks me up?”  The Hastings Women’s Law Journal compiled her experience and that of many other immigrant women in 1996.

MALDEF, along with the ACLU of Southern California, and other civil rights organizations filed a legal challenge in federal court against every provision of the initiative. MALDEF also filed a state challenge to the higher education provisions. The main claim in the federal case was the argument that a state cannot preempt the federal government’s exclusive authority on the matter of immigration.

The preemption argument later became standard in any challenge to anti-immigrant state and local laws. However, at the time it was largely untested.

The lawsuit also argued the provisions on education violated equal protection. The claims specifically referred to another MALDEF case – the landmark 1982 U.S. Supreme Court decision Plyler v. Doe, which held that all children, regardless of immigration status, have a constitutional right to a free K-12 public education. And it included claims of due process violations.

Federal courts, including the United States Court of Appeals for the Ninth Circuit, ultimately stopped Prop. 187 and it never took effect, with the exception of two penal code provisions that punished the forging, counterfeiting, distributing or selling of citizenship and immigration documents.

The State of California appealed, and MALDEF filed a cross appeal of the two surviving provisions. That cross appeal gave the initiative’s opponents a bargaining chip when Wilson finished his term and Democrat Gray Davis was elected governor.

“We went to mediation in the 9th circuit and reached a settlement with Davis to drop the state’s appeal in exchange for us dropping the cross appeal,” said Saenz. “It would have been difficult for Davis to do that if we didn’t have anything to offer in return.”

That was in 1999, and it was the legal end of Prop. 187. However, the initiative’s effects were many, in policy and politics. Among them:

“Without our legal fight, the effects of 187 would have been disastrous,” said MALDEF’s Saenz. “The main negative impact was the creation of new federal immigration laws like the one from 1996, but I would argue that federal law would have been even worse if there was no fight against the California proposition.”

And the most important effect of all is that today, California is a sanctuary state that values its immigrant population and leads nationally in the fight against unfair attacks on immigrants and other minorities.