Remembering the landmark case that provided equal access to education for all. 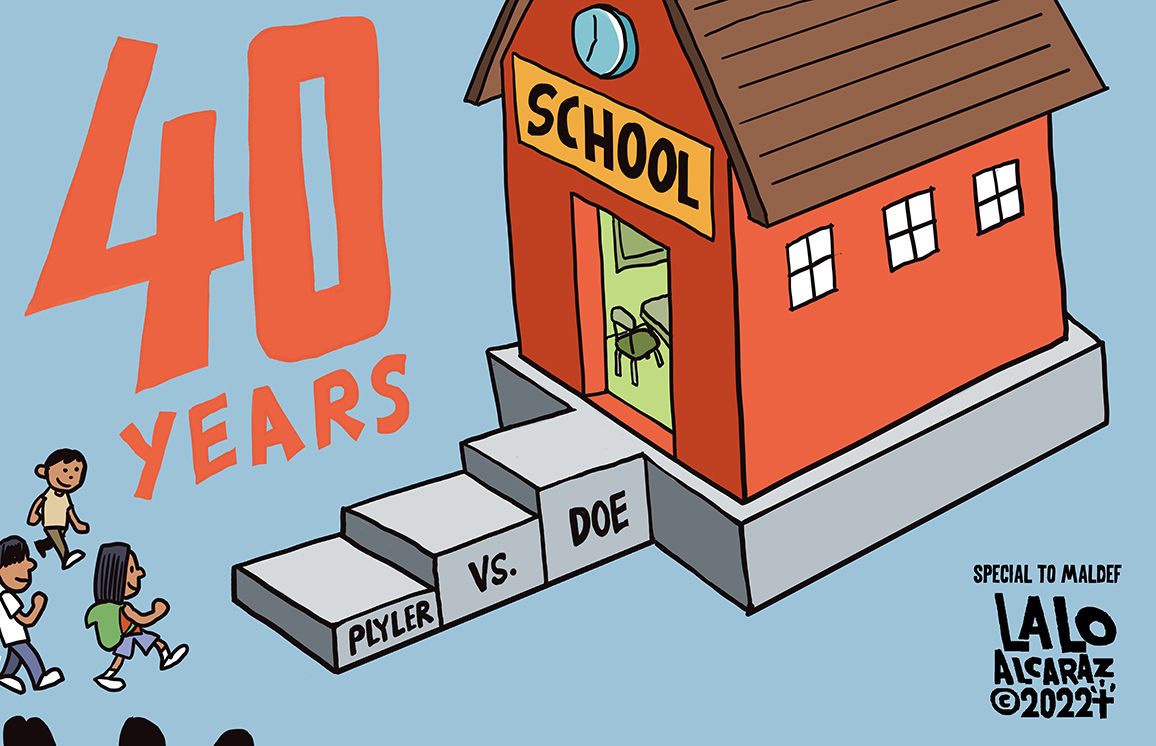 MALDEF STATEMENT ON THE 40TH ANNIVERSARY OF PLYLER V. DOE

LOS ANGELES – Today marks the 40th anniversary of one our nation’s most consequential constitutional decisions and a singular achievement in the history of MALDEF (Mexican American Legal Defense and Educational Fund).

On behalf of immigrant families, MALDEF challenged a Texas law to exclude undocumented children from the public schoolhouse by charging tuition. In 1982, the U.S. Supreme Court ruled that the law was unconstitutional and in violation of the Equal Protection Clause of the 14th Amendment. Because of the decision reached in Plyler, every child gets to go to a free public K-12 school without fear that their immigration status can cut short their education.

Please attribute the following statement on the impact of this landmark ruling to Thomas A. Saenz, president and general counsel of MALDEF:

“Plyler v. Doe changed this nation.  By ensuring equitable access to public school, the decision ensured that millions of children could dream of a better future for themselves and their families.  This has translated into immeasurable benefit to American society as teachers, doctors, artists, writers, innovators, judges, elected officials, and leaders in all areas have arisen from among those able to access school because of Plyler.

“Of course, the dream and the benefit remain incomplete until our Congress acts to protect all ‘Plyler kids’ as adults through immigration reform legislation to ensure that our nation fully embraces and welcomes these benefactors as the full-fledged citizens they have earned the right to be.

“At 40, Plyler itself is secure and well-settled constitutional law, incorporated in 1996 into federal statute.  Although unscrupulous politicians will continue to threaten the Plyler principle, such threats are empty indications of electoral desperation and vacuous thinking that regresses to thinly-veiled racism in the face of perceived political danger.

“At MALDEF,  we commemorate the efforts of all of those who secured and protected Plyler over the years.  When Plyler v. Doe was first filed, the constitutional principle achieved in 1982 was far from assured.  In the end, the plaintiffs had to first establish their own constitutional personhood before achieving the great victory of equity in public school access.  This ominously foreshadowed how far back some current demagogues would seek to push us as a democratic society.  We will never go back.  Long live Plyler v. Doe.”

Every child deserves a fair chance to learn and thrive. That might seem an obvious statement today, but it took years of legal battles fought by MALDEF to ensure that “every” child did not exclude any child – particularly, immigrant children.

After nearly five years of litigation, the U.S. Supreme Court ruled in 1982 that all children, regardless of immigration status, have a constitutional right to a free public education from kindergarten to 12th grade. The landmark case, Plyler v. Doe, grew out of a 1977 attempt by the Tyler Independent School District in Texas to oust the children of undocumented workers – farmhands, for the most part – from the school system by imposing tuition of as much as $1,000 per student to attend what were for everyone else free public schools.

MALDEF & University of Houston – Panel on the 35th Anniversary of Plyler v. Doe