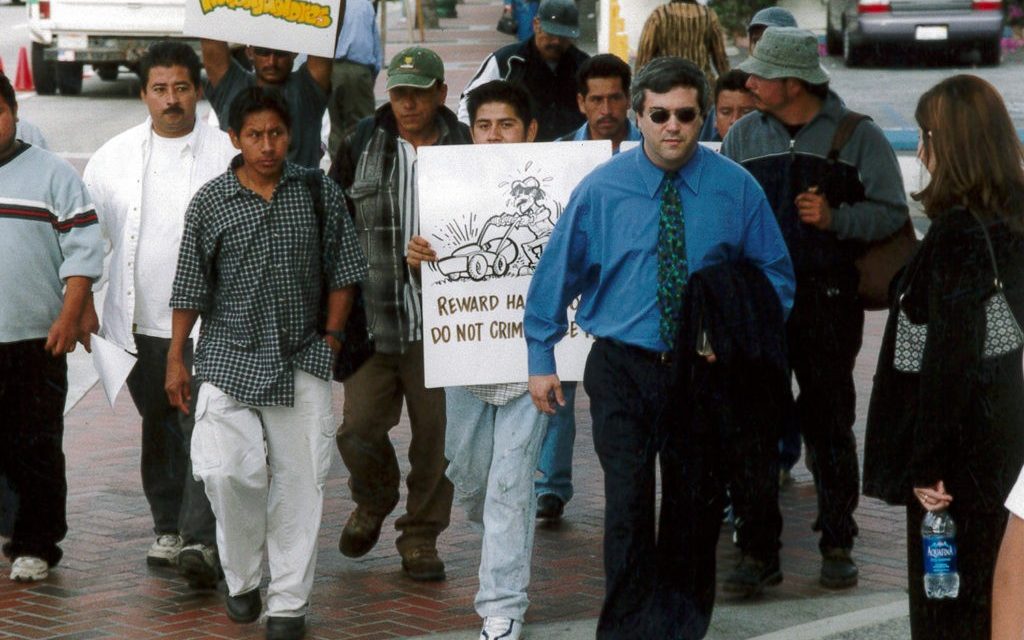 MALDEF’s Thomas A. Saenz accompanies a group of day laborers during the height of the challenge to anti-solicitation ordinances enacted by cities in California.

Workers who are hired by the day have long been part of the American labor force. In the 19th Century, they were immigrants from Ireland, Italy, Germany, and Poland. Later, immigrants from the American South, Black and white, were a native-born stream flowing into this pool of labor. But, for decades the clusters of men seeking work outside home repair stores or gathered on street corners in Southern California have been largely from Mexico and Central America.

In California, Latino day laborers became the visible face of immigration and the target of anti-immigrant groups who pushed for local ordinances effectively prohibiting them from soliciting work. They were a public nuisance, the anti-immigrant forces argued, and they endangered public safety by running into traffic and blocking sidewalks.  Most of those workers, though, simply sought to earn a day’s pay.

As the number of day laborers swelled, so did their opponents. In the 1980s, a handful of cities and counties in California began targeting day laborers by adopting anti-solicitation ordinances. These new measures, pushed by anti-immigrant groups, indirectly sought to drive out immigrants by criminalizing seeking work on public sidewalks.

The issue came to a head in early 2000s when MALDEF and a burgeoning National Day Laborer Organizing Network (NDLON) headed by Pablo Alvarado joined forces to successfully challenge the proliferation of anti-solicitation ordinances that had spread across California. NDLON was created to help day laborers organize against the myriad abuses they faced, from stolen wages to political scapegoating.

Redondo Beach, California adopted one of the most aggressive measures aimed at getting the job-seekers off the streets in 1987. The ordinance carried some of the harshest penalties, including a ban on drivers stopping or parking to hire workers who stood on public sidewalks.

The city’s anti-solicitation ban was barely enforced until 2004 when police launched a sting operation and arrested dozens of workers. A month after the sweep, MALDEF filed a challenge to the ordinance on behalf of NDLON and other day laborers. The case, known as Comité de Jornaleros de Redondo Beach v Redondo Beach, resulted in a landmark ruling that the ordinance, aimed at cracking down on day laborers (jornaleros in Spanish), was an unconstitutional restriction on free speech.

“The partnership between NDLON, MALDEF, and the Comite de Jornaleros in Redondo Beach not only vindicated day laborers’ First Amendment rights and served as a shield protecting job seekers across the country, importantly, it was a case where criminalized immigrant workers fought back and defended bedrock constitutional values for everyone,” said Alvarado, NDLON’s current co-executive director.

When MALDEF sued Redondo Beach, the organization and others had already spent more than a decade fighting anti-solicitation ordinances in California state court. It was part of a team of civil rights groups that challenged an Agoura Hills ordinance in the early 1990s. The state court ultimately rejected arguments that the ordinance was a discriminatory application of the law and a violation of free speech.

That case, CHIRLA v. Burke, became the template for a succession of federal lawsuits targeting the growing number of anti-solicitation ordinances that spread across the state. MALDEF’s strategy was to challenge those ordinances solely as violations of First Amendment free-speech rights, the winning argument later in the Redondo Beach lawsuit.

The Redondo Beach case would wend its way through federal courts for more than seven years.

In 2006, U.S. District Court Judge Consuelo Marshall, the judge assigned to the case, permanently blocked the measure from taking effect. She ruled the ordinance was unconstitutional “as an impermissible time, place, and manner restriction of the free speech right of day laborers to solicit employment in the city of Redondo Beach.”

MALDEF had sought a federal court precedent that would rescind the many local ordinances then modeled on the one in Agoura Hills and its successor in Redondo Beach. MALDEF’s strategy worked, but it took a while. Redondo Beach appealed to the U.S. Court of Appeals for the 9th Circuit. In June 2010, a three-judge panel reversed Judge Marshall. The court’s decision relied on ACORN v. City of Phoenix, a case that was resolved years earlier and involved solicitation by political groups that ran into traffic asking for donations from drivers. The two judges in the majority concluded that the Redondo Beach ordinance addressed the same risks of traffic disruption and injury as ACORN.

The case, however, would not end there.

In 2009, Thomas A. Saenz, an attorney with MALDEF, who years earlier had led the legal battle against Los Angeles County’s ordinance and filed the original Redondo Beach case, had returned to the organization as the new president and general counsel. MALDEF soon petitioned the Ninth Circuit for a rare en bancrehearing by an 11-judge panel. MALDEF sought to distinguish the Redondo Beach anti-solicitation measure from ACORN, arguing the city’s ban involved restrictions preventing the workers from asking for work on the sidewalk. The en banc panel ruled 9-2 for the plaintiffs, saying Redondo Beach’s restrictions were so broad they could be applied to “children selling lemonade on the sidewalk in front of their home, as well as to Girl Scouts selling cookies on the sidewalk” and even to “protesters imploring donations to a disaster relief fund.”

Saenz argued the case before the en banc panel and said the 2012 decision “resoundingly vindicates the First Amendment rights of day laborers throughout the western United States. The dozens of similar ordinances throughout the region that purport to prevent day laborers from speaking on sidewalks are now even more plainly violative of the Constitution. Each municipality with such an ordinance should immediately suspend and repeal its law. The longstanding principle that the right of free speech belongs to everyone has been significantly bolstered by this decision.”

The city appealed to the U.S. Supreme Court, but the High Court refused to hear the case and let the appellate court ruling stand.

Congregating on public sidewalks to seek work is now a clearly established constitutional right. The 9th Circuit decision drove a nail into the coffin of anti-solicitation measures, forcing other cities to rescind their restrictive ordinances.