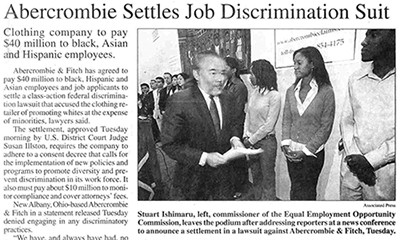 In the 1990s and the early 2000s, retailer Abercrombie & Fitch, was the hottest place for young people to shop and work. Ubiquitous in malls throughout the U.S., A&F presented a casual “all-American” look that felt exclusive. But that exclusivity was built on an all-white image that left Latinos, Blacks and Asian Americans out of its workforce.

In 2003, MALDEF and its partners filed a class-action lawsuit on behalf of a group people who had been fired or turned down for a job because of the company’s discriminatory employment policies. MALDEF  attorneys challenged A&F’s hiring practices as a violation of Title VII of the Civil Rights Act of 1964, which prohibits employment discrimination on the basis of race, color, religion, sex and national origin. At issue were the methods used by the retailer to ensure a disproportionately white and male sales force and its practice of discouraging minorities from applying for jobs.

A new Netflix documentary, “White Hot: The Rise and Fall of Abercrombie & Fitch,”delves into the retailer’s discriminatory policies that emphasized hiring workers who looked a certain way:  white.

The documentary tells an important story, particularly as we continue to deal with the aftermath of the Trump-era policies that targeted Latinos and other minorities, and fueled discriminatory practices among some employers.

MALDEF’s work on the class-action lawsuit garnered attention at that time because it held a company accountable for discriminating against young minorities.

“This important employment-discrimination case against the highly successful A & F began with a young Latino employee who came to MALDEF to explain how the company zeroed out his hours after a visit from central office,” said Thomas A. Saenz, president and general counsel of MALDEF.

Eventually, A&F was forced to revamp its hiring and training practices and pay $40 million to thousands of minority employees and job applicants as part of a November 2004 settlement.